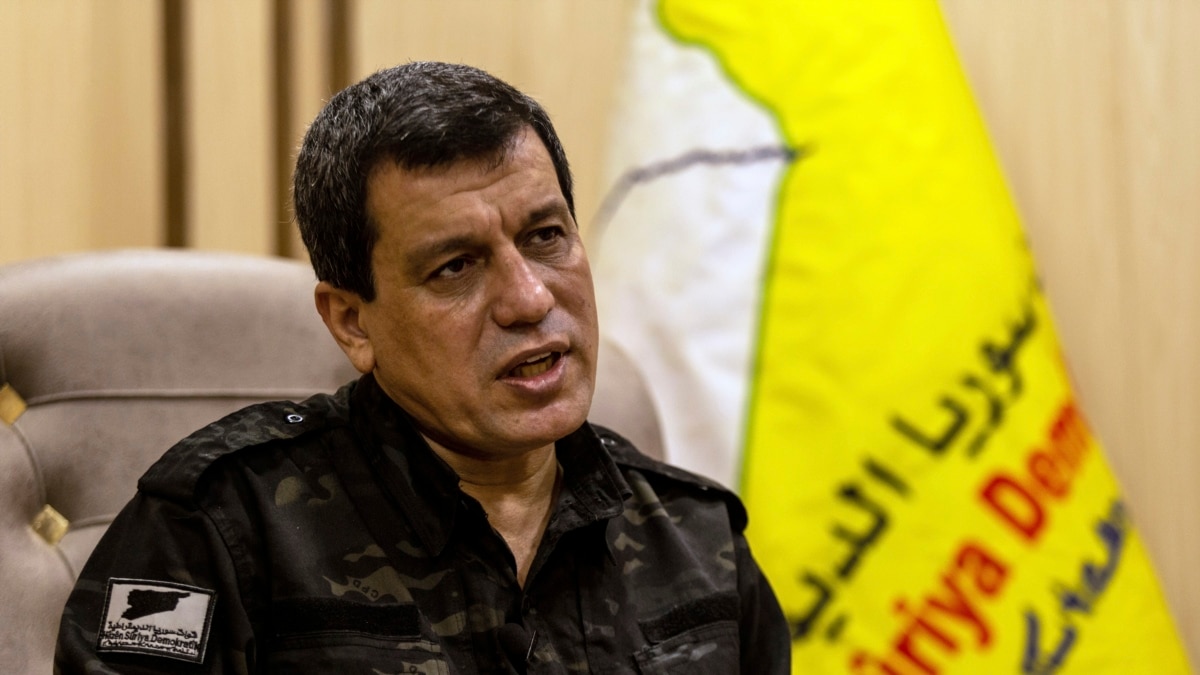 Kurdish groups have denied responsibility for that attack and say Turkish military assaults have killed civilians and imperiled the international fight against Islamic State militants operating in the region.

"There is no doubt that Daesh will benefit more than anyone else from this Turkish offensive," Commander Gen. Mazloum Kobane Abdi of the U.S.-backed Syrian Democratic Forces (SDF) told VOA’s Kurdish Service on Monday, using an Arabic acronym for the Islamic State, which is also known as IS or ISIS.

Abdi also discussed SDF relations with some 900 American troops in the region to assist local forces, and why he believes the White House needs to assume a "stronger position" on Turkey’s threat of a ground invasion.

U.S. officials have voiced opposition to the plan.

"The escalation in Syria and along the Turkish-Syrian border in recent days is dangerous and a threat to the safety of civilians and U.S. personnel in Syria," a White House National Security Council spokesperson told Axios last week.

Turkey views the SDF as an extension of the Kurdistan Workers’ Party (PKK), which Ankara has designated a terrorist group. Turkish officials have also said that preparations to launch a ground offensive in northern Syria are already underway.

The interview has been edited for length and clarity.

VOA: Turkish strikes in recent days have hit several strategic targets in northeast Syria. One of them was very close to a base shared by SDF forces and the U.S.-led coalition in Hasakeh. Another one targeted an energy infrastructure. How do you view the nature of these attacks?

Abdi: This time around these strikes carried messages to more than one side. They have already been targeting us for years. They want to eliminate us. They have been saying this clearly. But the recent strikes had a message for others, especially the [U.S.-led] coalition. They are simply telling the coalition: You must not have any presence here. They’re telling them that [the coalition] presence won’t be an obstacle [for Turkey] to hit these areas. It has no other explanation when they strike a coalition base, areas where coalition forces operate, and even al-Hol camp. That is why these forces must have a response to these actions.

VOA: A coalition base in Shaddadi [in northeast Syria] was also targeted during the attacks. While nobody has claimed responsibility for the Shaddadi attack, news reports said Iranian-backed militias may be behind it, especially since they have attacked U.S. forces in the past. Is this a coincidence or could it be coordinated?

Abdi: This doesn’t need any analysis. Just a few days ago, another round of Astana meetings took place between Iran, Turkey and Russia. These three countries have formally stated that the coalition forces must leave [Syria]. They clearly oppose the presence of U.S. forces here. They have been working actively to achieve that goal. These countries share this objective. That is why there is coordination between them.

VOA: Has the U.S. response to the coordinated efforts between these countries been adequate?

Abdi: The Americans have expressed their concerns. I also believe [the Americans] have talked with them through their channels of communication. But I believe the U.S. should have a stronger position about what has been going on.

VOA: Washington has made it clear that it opposes a Turkish ground offensive into Syria. With regards to those channels of communication, it has been reported that the U.S. has conveyed to you some conditions from Turkey. Is that true?

Abdi: We have seen those reports. But nothing of that nature has happened. However, all institutions of the United States government, including the State Department and the Pentagon, have expressed their concerns about this [potential] offensive. They have said very clearly that they oppose such an offensive. We have also been informed formally that [the Americans] have been talking with Turkey to prevent such an attack. America has always been pushing all sides for dialogue. They have been saying this publicly and privately.

VOA: Do you believe these statements are enough to prevent such an offensive?

Abdi: No, they are not enough. The U.S. position should be stronger. The AKP-led government in Turkey is losing popularity ahead of the country’s elections. They believe that launching a large-scale attack [into Syria] will get them votes from Turkish nationalists. Turkish officials oftentimes say that they don’t listen to others when it comes to Syria. Everyone needs to understand this. That is why we believe the United States should have a stronger position about Turkish threats.

VOA: In 2019, when Turkey invaded parts of northeast Syria following a partial U.S. troop withdrawal, then-candidate Joe Biden tweeted that pullout of U.S. forces from those Syrian Kurdish regions was a “betrayal.” Now Biden is in the White House. Has he made any pledges so that what happened in 2019 will not be repeated?

Abdi: I recently sent a letter to President Biden and reminded him of these things. President Biden should keep the promises he made in the past. We hope he will keep them now. It has been three years since that Turkish offensive. Turkey has since been trying to wage another one, but we know it is the U.S. position that has prevented such an offensive from happening until now. So, the Biden administration has demonstrated a position on this. We just hope that it continues actively.

VOA: What are your views on the positions of the Russian and Syrian regimes?

Abdi: We know that Russia is against this attack, and they have expressed their opposition. But I must say that Russia is also responsible for the recent Turkish bombardment. Had they not opened this region’s airspace for the Turks, they would not have been able to attack. Of course, the Russians and the U.S.-led coalition can stop these attacks. Their position has so far been weak. This has emboldened the Turks to carry on their air campaign. As for a ground operation, they have opposed it.

With regards to the Syrian regime, we criticize them. This is Syrian territory. Syrian territory is being bombarded. Syrian people are being targeted. But the regime has so far been quiet about it. They have not denounced it. They have not taken this case to the U.N. Security Council, even though their own soldiers have been killed in recent Turkish strikes. In fact, the deaths and casualties among them are higher than those among our forces. The regime needs to have a stance because defending this land is not only the responsibility of our forces, but also theirs.

VOA: Some reports said that you had a meeting with the general commander of Russian forces in Syria. Can you confirm it? And if so, what did you discuss?

Abdi: It is true. We met [Monday] morning. We primarily talked about efforts to stop these Turkish attacks. We asked them to stop these attacks because it is their duty. There is the 2019 Sochi agreement between Russia and Turkey, which Turkey has been violating. We asked the Russians to recognize that agreement and prevent Turkey from launching a ground offensive. There was no discussion about any conditions made by Turkey as it was reported in the press.

VOA: Will this conflict affect your war on the Islamic State, which is also known as Daesh, especially since some of Turkey’s strikes hit al-Hol Camp, where thousands of people, including families of IS fighters, are held?

Abdi: We have paused our operations against Daesh, because all of our forces that work with the coalition forces have become a target [for Turkey]. Our counterterrorism units and camp and prison guards have come under Turkish attacks recently. So their movements are limited now. We had no choice but to suspend our anti-Daesh operations. A Turkish ground offensive would have even bigger impact on the resurgence of Daesh. In fact, Daesh prisoners in our custody are already preparing for riots, because they know that if there is an offensive, we won’t be entirely available to guard prisons holding Daesh members. Moreover, we have intelligence about Daesh plans to try to smuggle our people from al-Hol camp, particularly the families of their emirs, and to step up its terror activity in places like Raqqa and Deir al-Zour. So, there is no doubt that Daesh will benefit more than anyone else from this Turkish offensive.